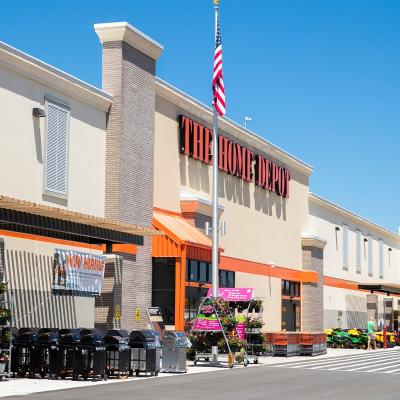 During the pandemic, Home Depot became the King of the DIY fixers. On Tuesday, it added a new jewel to its crown for toppling those who doubted it could keep up the momentum.

Despite losing customers in the first three months of 2022, the big-box retailer turned in its strongest first-quarter sales numbers on record. Who said you can’t rise above inflation?

In the last two years, Home Depot had become a temple of refuge for every housebound homeowner. Circumstances gave eager HGTV fans more time and fewer excuses, and they finally put in that deck they’d built up in their mind’s eye while lumbering around the backyard. Whether or not these feats of engineering were level with expectations, the Depot rode the nationwide wave of amateur home improvement to a record $150 billion in sales last year.

The $39 billion in revenue reported Tuesday — well above the $37 billion expected by Wall Street — was 3.8% better than a year ago, rising above the double whammy of inflation and supply-chain disruptions that have driven up the cost of key materials like lumber. Net income rose to $4.2 billion, from $4.1 billion — and for that Home Depot has the mighty, and mightily capitalized, American homeowner to thank:

Consumer Protection: There are other signs that, even as companies have no choice but to pass on higher costs to customers, American consumers are far from buckling under the weight of the heftier prices. The Commerce Department said retail sales rose 0.9% in April from a month earlier, despite inflation near 40-year highs. And while big-box rival Walmart saw its profits hit by higher costs, the company reported a 3% increase in its latest-quarter sales on Tuesday.