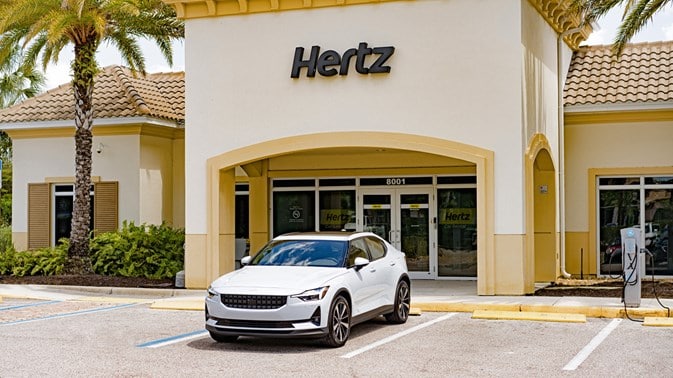 French philosopher René Descartes often theorized that pain and pleasure exist on a continuum — you can’t have one without the other. And Polestar, Volvo’s soon-to-be spun-off EV unit, can attest: Its latest deal is a major win even if it hurts. Or, we should say, Hertz.

On Monday, the EV maker signed a major deal with the rental car agency, agreeing to supply 65,000 cars over the next five years.

First, let’s shift gears into a quick history lesson. Polestar traces its roots back to the Swedish touring car racing scene of the mid-1990s. By 2009, it became an official partner of Volvo, designing both commercial and racing vehicles. By 2015, Volvo (itself a subsidiary of China-based multinational Geely) acquired Polestar outright. Two years later, it shifted focus entirely to electric vehicles, and, in September 2021, Polestar announced plans to go public via a SPAC merger (expected later this year) at a $20 billion valuation.

The Hertz deal is a major step for the Swedish carmaker, and the 65,000-unit order represents more than double its 29,000 unit sales last year — and Polestar is hoping to use it as a launching pad to catch up to pack leader Tesla (which already inked a 100,000 unit deal with Hertz in October):

Red Light, Green Light: For Hertz, which filed for bankruptcy in May 2020 (no need to tap the brakes and explain this one), both the Polestar and Tesla agreements mark two major steps in its pledge to offer North America’s largest electric rental fleet — and “one of the largest in the world.” Tesla’s deal with Hertz last year sent its share price surging, leading to its first-ever $1 trillion valuation. And the latest news has shares of Gores Guggenheim — the blank check firm Polestar plans to partner with — spiking to their highest point so far this year.